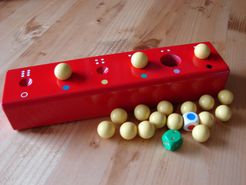 A dice game involving moving balls on a wooden box to place them into a hole. Kulbank ("marble bank") is a game for small children which consists of a bright red wooden box with only a small hole open. You lay it down flat on its side on the table. On the top side are six spaces, each labeled both 1-6 and with a color. Space number two is the hole. Apart from the "bank" itself, the game comes with two six-sided dice (one regular and one with colors matching the spaces on the box) and a number of yellow marbles (about 25). To play, divide the marbles evenly to all players and put any remainders into the bank. Select one of the dies to play with. Each player then rolls the die. If the space indicated is free he puts a marble there. If there is a marble there he gets to pick it up instead. The goal of the game is to lose all your marbles. If your children want to play the game too often, this may be accomplished in more than one way. Children tend to like this game and are able to play it from an early age (as soon as they can recognize colors and sit still long enough). To make the game slightly more educational, use the die with numbers instead. There is absolutely no skill or strategy element, so your age or previous experience with the game has no bearing on who will win. This may be considered a bug or a feature depending on your viewpoint.