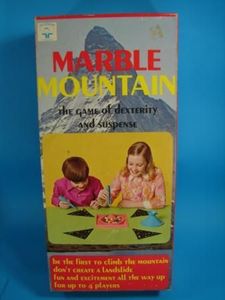 Marble Mountain is a children's dexterity game. Elements of the game are: A large number of marbles in solid colors including red, blue, yellow, green and purple. A yellow plastic "mountain" in a volcano shape with a small rim at the bottom to catch fallen marbles. A matching plastic cone that marbles are poured into and that the mountain is then fitted into. The combination is inverted so that the mountain then rests on its base and the plastic cone is carefully lifted off, leaving the mountain evenly covered with a variety of solid colored marbles. A set (I think there were 6 of these but am not positive; it might have been 4) of black cardboard playing fields cut into the profile of a mountain. Approximately a dozen circular depressions are cut into each playing field, and these have a random distribution of colors matching the marble colors painted on them. Several sets of oversized, blue plastic tweezers with blunt tips. The object of the game is to be the player who fills the most circles on his playing field by picking the appropriate color marbles off of the plastic mountain with the tweezers and setting them into the matching circles on his board, without causing an avalanche of marbles to cascade down the sides of the plastic mountain, and also without knocking any marbles out of their depressions on his playing field. The first child to cause an avalanche or knock over her marbles loses. In the event that none of the players create an avalanche or knock off marbles, then the first player to fill up all of the circles on her board wins. Players must start at the base of their own mountain playing field and fill in the entire bottom row with marbles before ascending to the next row up. Since each playing field has a unique distribution of colors, players will need different colors of marbles at different points in the game. This means a layer of strategy can be added by trying to remove not only the color of marble you need next, but by selecting a specific marble of that color from the marble mountain that leaves your opponent with more difficult and avalanche-prone choices.