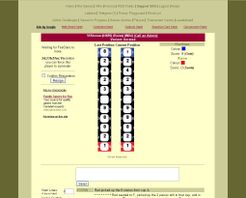 55Stones is played on a one-rank mancala board which has 1×11 holes. Each player has a cup which serves as a store for the stones he captures. The players sit at the distant ends of the board and the cup is put on the right side, respectively. Each hole has initially 5 stones. East starts. Each move, one player takes the contents of one hole in his hand, then the opponent must take the contents of another hole in his hand. The player who decides first has sente (a Go term), the other player has gote. Then both players simultaneously sow the contents of their chosen hole towards the opponent. Numerous rules about how the stones can be distributed. The game ends when simultaneous sowing is no longer possible. Draws are not possible. Online Play Super Duper Games