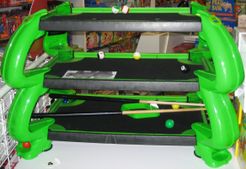 A member of the billiards family, 3D Pool utilizes three vertically-stacked "tables", with tubes connecting the corners of the adjacent tables. The four object balls and cue ball of each player (or team) start out on the top table, and players compete to get their object balls to the bottom table first. (The goal is a little different from that in each of the three suggested variants.) The tubes between the tables not only allow the balls to descend, but also to ascend. One of the suggested variants mandates use of this ability by requiring the player not only to get her object balls to the bottom table, but then also to get her cue ball back to the top table, in order to win. Like Crokinole and Carrom, 3D Pool is a table-top game.