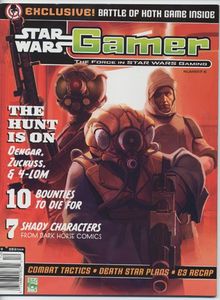 | Wizards of the Coast

This game was published in Star Wars Gamer vol 1, Issue 6. From the introduction to the game, Battle of Hoth is a game for 2 players. One player commands the Rebellions' Echo Base Garrison, the other the Imperial Blizzard Force. This is essentially a small tactical level wargame. The chits are DIY style (cut out and stick on cardboard) and features familiar unit with Speed, Armour and Firepower attributes. The magazine comes with a plain white hexed folded map. There are 3 scenarios of varying complexity. Each turn, players roll 2 dice and use the higher roll as command points to activate the corresponding amount of Unit. Battles are resolved by rolling a D6 equivalent to the unit's firepower. A hit results in a 4, 5, 6 roll unless there are penalties or bonuses applied (for terrain or units). A good fairly quick game.