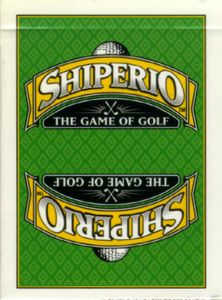 The Game of Golf Shiperio is a golf game that is played with cards. The object of the game is the same as it is on the course... to shoot the lowest score. Cards range from an Ace up to the dreaded Snowman (an 8). Play nine holes or eighteen, it's up to you. Whether you're a scratch golfer, a hacker or have never picked up a golf club you'll love Shiperio. Just like on the course players will succeed with skill, strategy, and a little luck! What's with the name Shiperio? In golf, the term Shiperio is similar to a Mulligan where a player is allowed a second shot without penalty. The nice thing about a Shiperio is that, unlike a Mulligan, the golfer gets to choose which ball to play. In our game we have a card called the Shiperio Card . It's played quite similar to a Shiperio on the course. We liked the name so much we decided to name the game after it.