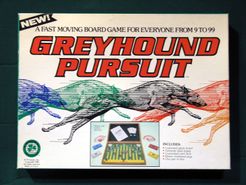 A party game of wagering where 4-10 players acquire a hand of cards in the hopes of holding the card of the winning peg (greyhound) in a dog track racing simulation. The game consists of a game board, eleven numbered pegs which represent the dogs, a deck of 44 cards which represent 12 different dogs, and one Super Bonus Card. 200 tickets representing money in denominations of 5,10, 15, and 20 are used in gameplay. Two six-sided die are used to roll and advance the dogs on their individual tracks, and four dogs are set aside as scratched from the race and gameplay will force contestants who hold these dogs in their hand to feed the pot on occasion. The winner is the contestant(s) whose dog catches the rabbit and wins the race. The pot is split between the number of matching cards in the group.