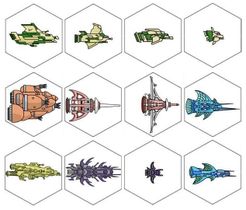 Anaxis is a tactical space wargame, using ship counters and hex paper. It's moderate in complexity and detail (especially when compared to some other games in the genre). For instance, while each ship is kept track of separately, its weapons are grouped into "primary" and "secondary" banks. It has some unique die mechanics that speed things along, and there's little to write down, so a large battle can be played out in a few hours. The rules come with six different races, each with four main-line ships and one special ship that can bend the rules in some way. It also has several small scenarios to get you up and playing quickly.