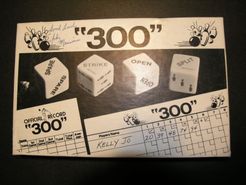 "300" is game of chance, for ages 9 and up, consisting of four dice: two red &amp; white dice, one blue &amp; white die, and one green &amp; white die. Score sheets, fashioned exactly like bowling scorecards, are used to calculate scores, and series cards are used to record and maintain averages. The game can be played as a solo affair, or by any number of players. But six is a recommended maximum, to expedite play. Just like bowling in a league, the contestants compete for best average between three complete, 10 frame lines of dice bowling. The Dice: The Red &amp; White dice are to be rolled together first in each frame. If a STRIKE is rolled, regardless of what is on the other die, this is entered on the scoresheet, and the next player proceeds with their turn. A STRIKE is rolled when one of the two dice shows the word, or when the two dice show ten total pins (5 each). The Green &amp; White die is rolled when any combination of pins showing on the dice, other than a STRIKE or SPLIT are shown. This die is rolled after the initial roll of the Red &amp; White dice in an attempt to pick up the spare. Also, if SPLIT is showing with 3, 4, or 5 pins on the other die (Red &amp; White Dice) then the player enters the number of pins on the other die as an initial score and rolls the Green &amp; White die to pick up the spare. The Blue &amp; White die is rolled when SPLIT appears on the initial Red &amp; White dice roll with 1 or 2 pins showing on the other die. The scorekeeper will enter this as 7 or 8 pins for the first roll. (The SPLIT is counted as six pins plus the 1 or 2 other pins). When either of these combinations occur the player must use the Blue &amp; White die in an effort to pick up the spare. One Red &amp; White dice is marked SPLIT, 1, 2, 3, 4, 5. The other is marked STRIKE, 1, 2,3, 4, 5. The Green &amp; White die is marked SPARE, SPARE, SPARE, SPARE, OPEN, OPEN. The Blue &amp; White die is marked OPEN, OPEN, OPEN, OPEN, SPARE, SPARE. About the Publisher/Designer. The game is copyrighted 1979, to J. Messina, and his address of 5310 Otsego St. Duluth, MN 55804 is listed on the outside narrow edge of the box. His phone number was also listed as 1-218-525-6298.