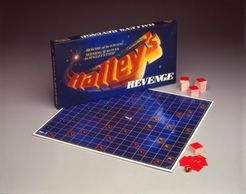 Players roll the dice and moves one of their satellite pieces. Whenever a players jumps over an opponent's satellite and lands on an unoccupied space, the player captures the satellite. After completing movement of the satellite, the player then adds the same amount of comet pieces (as pips on the die) onto the gameboard following the designated comet path. Players start with 10 satellites, and lose them either to opponents or to the comet if a comet piece is laid on top of it. The game ends when only player has satellites left on the board. Players score their captured satellites and all satellites left on the board, and the player with the most is the winner. The comet wins in the event of a tie. From the bottom of the box: Halley's Revenge is a light strategy game with the excitement of a high speed chase. The game is for two to four players, ages 8 to adult. The object of the game is to capture as many of your opponent's satellites as possible before the comet takes over the board. Halley's Revenge has no limit to its wrath, it moves at an incredible rate, gobbling up everything in its path. As Halley's comet occupies more and more spaces, satellite movement becomes more and more difficult. Run if you can, but Halley's comet is out for revenge.