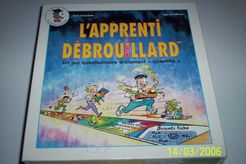 This game is a spin-off of "Le Docte Rat", using the same mechanism and have been published by the same company. Although the game has been marketed as a standalone game, the trivia cards can be used on either the board included or with the "Docte Rat" board. This game is themed after a very successful magazine called "Les Débrouillards". This game was published for the Quebec, Canada market in mind and has been available only in French. All trivia card's questions have been picked up from the "Les Débrouillards" magazine. The goal of the game is to allow the players to learn while having fun. Subjects covered is natural science, ecology, general science as well as the quality of the French language. Target age group : 9-109 years old.