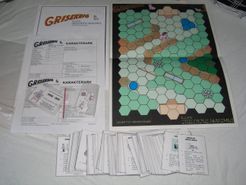 PigWars is the humorous tactical wargame of fighting pigs in the sty. Players generate their champion pig with certain characteristics and then sends it into the sty to slug it out with the other contestants. Game mechanics are fast paced and quite easy to learn yet tactically challenging - making the game fun to play right away and still difficult to master. Humor play a part of the game as the various ways of dealing with the other pigs involve 'Bad Breath', 'Gas attack', 'Oink!' and more. While skidding around in the mud, pigs may be bombarded with truffles or go insane in hot pursuit of the others. Players are knocked out of the game along with their pigs, leaving a final champion which then earns experience points that may be used to develop the pig. Making it an even more deadly adversary next time it's in the sty. Expanded by: Piglings Revenge, PigWars Expansion Module #1