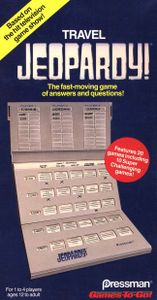 The classic television quiz program has been adapted to be played while traveling by two publishers. Each version is miniature version of each publisher’s version of the game. The Pressman Toys version has one player acts as quizmaster while the other players play like the game show. The Tyco edition divides the categories among the players and each will act as contestant and quizmaster for each other during the game (although players could agree to play the game show way). In both versions of the game, a player chooses a category and a dollar amount. The first to respond with the correct answer is credited with the value of the response. However, the jeopardy is that an incorrect response has the values deducted from one’s score. Random Daily Doubles during a round allow one player make a wager based on one’s own knowledge. Players may wager any or all of their money on one final response in Final Jeopardy! The player with the most money is the winner.