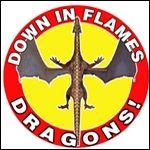 Down in Flames: Dragons takes the Down in Flames series of WWII dogfighting card games to the fantasy genre! Taking command of a mighty dragon, you play cards that move you into a good position to attack the opposing dragon. Then, let loose with Breath, Magic, and Melee attacks. Available as both a Virtual Table Top game (using Vassal) or PDF download. Price: $12.99. From the publisher's web site (http://www.dvg.com/dragons.htm): Down In Flames Dragons takes the Down In Flames series of tactical card games to a whole new genre, fantasy! Dragons features the 3D computer generated artwork of Chris Richardson! Dragons places each player in command of a mighty dragon. You get to play cards to get a good position on the opposing dragon and let loose with a wide variety of Breath, Magic, and Melee attacks. Dragons features the DIF award winning action/reaction system. This means you get to play a card, your opponent gets a chance to react, you get to react, and so on. This makes for a great simulation of aerial conflict. There are three ways to win. You can inflict wounds on the opponent, tire him, or capture his Lair. The game comes with 3 pre-built dragon decks for the Fire, Ice, and Lightning dragons. You can also construct your decks using the extra cards included with the game. This gives you all the fun of building your own custom decks, like CCGs, but without the big cost of hunting down all those rare cards! Key Points: - Very easy to play - Good for ages 7 and up - Get a great feel for aerial combat - Games can be played in 30 minutes - Play with Pre-Built Decks - Construct your own Custom decks - Built in experience system to upgrade your dragon mid-game - Skill cards to improve your dragon’s abilities Component List: - Built-in Tutorial and Help Windows in Vassal - 72 Original Full Color card Designs Target Audience: This is a great game for DIF fans, card game fans, and fantasy fans. Game Formats: Virtual Tabletop PDF Download What is a Virtual Tabletop Game? Our line of Virtual Tabletop games are powered by the Vassal Engine. Vassal is an ingenious software package that allows you to play games through the internet. Vassal is not a complex computer game that must be learned. Instead, it shows you the game board and pieces, and you get to move them around as if in a face-to-face game with another player. This means you do not have to spend hours learning how to use a computer game. You simply move the pieces around the on-screen board as if you were sitting across the table from another player. As you make your moves, the other player sees your moves. Vassal includes a Chat system to keep you in contact with your opponents. A Vassal game includes all the maps, counters, automated die rollers, and card decks you need to play the game.