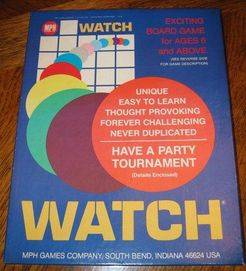 Watch, a.k.a. Quick, is a game of tactics. The 25 wooden playing pieces in 10 different colors are placed on the 25 squares on the board. Each player has a playing token and in turn places their token over one of the wooden playing pieces on the board, but the second player can't choose the same color as the first. Following the rules of play, tokens are moved until one player either: manages to move their token onto the piece occupied by their opponent, capturing it; moves their token onto a piece of the same color as the piece on which their opponent's piece stands; or ensures that their opponent is unable to move since all pieces in a vertical or horizontal line from the opposing token have already been removed.