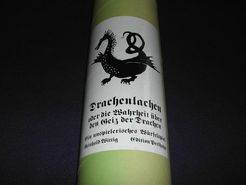 The players are dwarves who try to steal golden rings from the dragon's lair in the middle of the game board and carry them out of the dragon's cave. Players take turns rolling one die, moving the corresponding number of steps: - if they are carrying a ring, they move towards the exit - if they are not carrying a ring, they move towards the center of the cave. When two dwarves meet and one is carrying a ring and the other isn't, the one whose turn it is kicks the other one out of the cave (stealing his ring first, if applicable). Whenever a "1" is rolled, the dragon laughs. The active player then rolls two dice to determine two or more fields (such as 31 and 13, for instance - special rules apply for rolling doubles). All dwarves on these fields lose their rings and are kicked out of the cave. The first player who carries two rings out of the cave is the winner. The game is entirely dice driven, there is no decision-making involved.