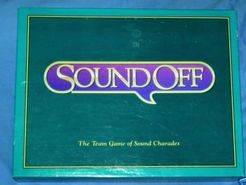 Two teams attempt to reach the end of the board by acting out. When a team lands on a space, the actor on that team (it changes every turn) must act out what's on the card in 30 seconds or less. The catch is, they *must* use sound - the rules include a provision where if the other team catches them not using sound, they lose credit for a right answer. Only sound effects - no speaking - are allowed however. The board spaces are as follows: Action Reaction, which is a long form charade such as "passing gas and blaming it on the dog." Famous Expressions is usually a cliche or popular phrase. People, Places &amp; Things is self explanatory. The fourth category is "Hot Spot." Five items are on this card, and the team gets 60 seconds. If the actor can convey three out of the five, they get credit and continue to roll and move. Getting all five earns a "Safe &amp; Sound" card. This can also be earned via its own space on the board. Safe &amp; Sound allows an actor to pass a charade - but only once on a given turn, regardless of the amount of S&amp;S cards they have. Some spaces are designated all play by an arrow. The finish space of the game is an All-Play Hot Spot. Whichever team gets the majority of the five items in 60 seconds gets credit - and if you're on the team on the final Hot Spot space, that means you're the winner.