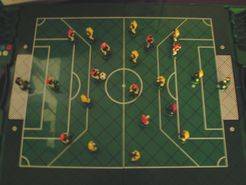 Totalfootball is a Football (soccer) strategy game. It consists of a hard plastic carrying case which is, when opened, the football field. Each player has a team of 11 players, including the keeper, just as in the real game. The rules are an abstract version of the real rules, and in order to execute the actions, dice are used for details. The game is published by a company from Kazachstan (Mind Game inc.) and several other Kazachstan companies have aided with this production. Besides a rulebook in a lot of languages also a CD-Rom with the game rules is included.