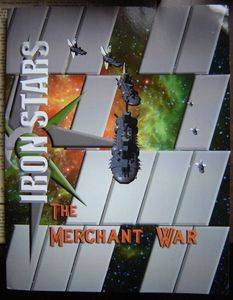 The Merchant War is the first supplement for Iron Stars. Here, you will find much to expand upon the basic Iron Stars game, including: * A detailed history of the Merchant War of 1908-1909 between the United Kingdom and Austria-Hungary; * The introduction of fast attack craft and His Majesty's Space Station Celestial Queen; * One dozen new ship designs, including the German Äthermarine and Austro-Hungarian Sternmarine; * Six new scenarios covering actions of the Merchant War; * More information about Martians by the best-known chronicler of the Invasion, H. G. Wells; * Additional rules for combat, including crew casualties and searchlights; * New special equipment, such as machine guns and poison gas; * Errata for the original Iron Stars rulebook; and * Rules for including freighters and Q-ships in your games. In addition, The Merchant War includes counters for the ships involved in the scenarios provided and an additional mine template.