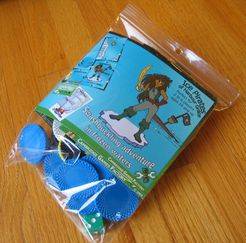 Arrr, yes! The legendary treasure of the Pirate Admiral… They say it’s buried somewhere on Kelly’s Island, it is… But where the island is, and where t’ dig for it once ye get there, I couldn’t tell ye… Unless I was… properly persuaded, if ye get m’ meaning… The object of Ice Pirates is to sail through the frozen waters of Conception Bay in order to find and dig up the Pirate Admiral’s treasure and stash it somewhere no other pirates (your opponents) can find it. Conception bay is laid out as a board of cards with Bell Island in the middle and named ports around the outside. Each port offers a particular ship upgrade that will assist players in their quest to find and keep the treasure (e.g. Cannons at Harbour Grace, Ice Breakers at Cupids Harbour, Telescopes at Pouch Cove). The rest of the board starts the game face down--hidden in the bay are three lost islands (where you can find treasure maps) and Kelly's Island where Peter Easton (the Pirate Admiral) had his secret base and (according to legend) left buried treasure when he left for warmer climes. The first player to find, or steal all three treasure maps and reach Kelly's Island gets to dig up the treasure--at which point the game switches to a treasure run with every other player attempting to steal the treasure off them. Most of the bay cards contain icebergs, which block your movement if they come up in the wrong places, and three shipwrecked mariners who will join your crew if you find them and rescue them--increasing your fighting strength.