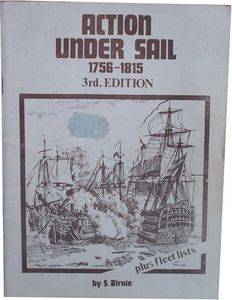 An easy to grasp set of miniature rules utilizing; pre-plotted movement, national characteristics, realistic wind effects, detailed gunnery and even shore batteries. The base set of rules (35 pages including scenarios, ship design, optional rules and examples) came with 3 sheets if unpunched cardboard ship counters (British, French &amp; Spanish) they later published a set of fleet counters to allow the re-fighting of Trafalgar. In overall complexity I would say it is slightly higher that Wooden Ships &amp; Iron Men from AH, movement plotting is pretty much the same, what is more detailed is the gunnery and range of possible actions for the ships.