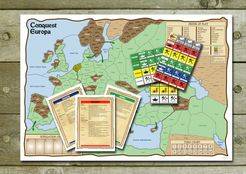 Conquest Europa is a derivative of Britannia, which deals with the full scope of European history from AD400 (The Fall of the Roman Empire) to AD1480 (The Fall of Constantinople). As with Britannia players control various historical factions (Romans, Huns, Mongols, Persians, Poles, Ottomans etc) and gain victory points from pre-defined activities (occupying areas, destroying enemy units etc). The game was manufactured as a pre-production evaluation/test version and was never mass produced by a games company. Approximately 20 copies were hand-manufactured between 1989 and 1992. 25 years on from the first version ... a 2014 Edition is available on BoardGameGeek as PDF download (see below) comprising updated components and some minor rule/scoring changes.