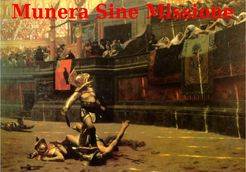 Munera Sine Missione is a free set of miniatures rules which are designed to allow players to recreate gladiatorial combat in the arenas of Ancient Rome. The are designed to give a very quick, simple game, which can be played in ten or so minutes The game uses a hex grid to regulate movement, and each gladiator has a number of action points to spend each turn. These points can be spent to move or attack other gladiators. Attacks are resolved by a simple roll-off between the attacker and defender, with the attacker getting bonuses for position. The defender gets a save roll to avoid wounds. Play continues until a gladiator loses all of their wounds. Rules for a wide range of weapons are included,and all major historical gladiator types can be depicted with little problem. Munera Sine Missione is available as a free download from http://hordesofthethings.blogspot.com.au/p/free-stuff.html. The current version is 2.4 (September 2016)