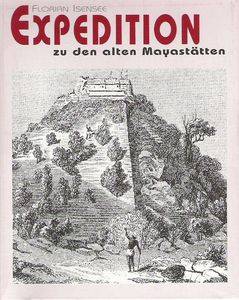 Players are on an expedition to discover ancient Mayan temples and capture their treasures. You must help each other on the trek through the jungle, but if you reach a temple site, you must then compete for the rewards. The card game has different phases in which players secretly lay cards to make the expedition's total value exceed the hazards. You can try and trick the others by resting on the journey, but if this means that trek fails, you must pass out your highest cards to the others. Then at the temples, players use their cards to beat each other to the treasures. The 64 card deck uses authentic b&amp;w illustrations from contemporary explorations of the nineteenth century, which lend the game a strong theme. The cards have simple German text. The cardstock is laminated but flimsy, and while the production is good for a first release, gamers may expect better. However, the price at Essen 2005 was only €4 which was fair. German rules only in the box.