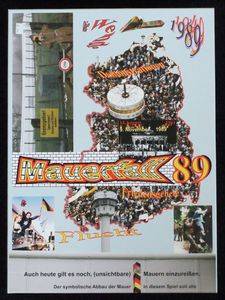 From the game's website (www.mauerfall89.de): "Mauerfall 89" is a game with a political background which tries to focus the oblivion of the GDR (former eastern Germany). It deals with the fall of the Berliner wall in 1989. Goal of the game is the fall of the wall (respectively game stones) with demonstrations and attempts to escape - but the regime doesn't sleep... "Mauerfall 89" was released in 2005 as a limited first edition.