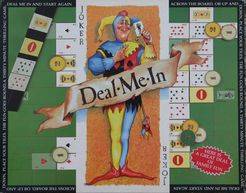 Briefly: Scrabble with poker hands. Deal Me In is a board game in which players collect tiles (which represent playing cards) and attempt to lay them on the board so as they form poker hands. The higher the hand, the greater the score. The poker hands interlock in the same way as the words on a scrabble board, so it`s possible to score for more than one hand on a turn. When a player scores, he/she takes score chips from the box. the player with the highest scoring number of chips when the cards run out is the winner. Simple, fast and fairly enjoyable; but very lightweight. An opener/closer. The bits: One board, comprising an 11x11 grid. most of the spaces are blank, but some have representations of playing cards on them; these are bonus squares, a la scrabble. 56 "playing cards". These are actually good quality cardboard tiles. 30 No Entry tiles. 4 playing racks Poker chips in various denominations Each player starts with chips worth 150 and 7 tiles. These are placed in the playing rack. the four joker tiles are laid on the Joker squres on the board. Players must, on their turn lay at least one card on the board to form a legitimate poker hand, or failing that change one or more tiles at a cost of 10 per tile. Tiles laid must extend hands already played, again in the same way as scrabble. Players do not have to lay five cards at a time. For example, a player could form four of a kind simply by laying three tiles of the same denomination next to a previous tile with that denomination. bonuses are scored by laying tiles on the special bonus squares on the board. Again, these squares have representations of playing cards on them and in order to score, you must lay the tile of the same denomination as the bonus square in order to score. When a five card poker hand has been formed on the board, it can no longer be extended, so a No Entry tile must be laid at either end of the hand to stop any further tiles from being added. If a hand is played so it covers a Joker tile, this tile is taken up and added to the players` hand. If a Joker is laid as part of a hand, it may be replaced with the correct tile which it represents on a later turn. When a player lays a hand down, he/she takes poker chips to the value of the hand. This varies from 10 for a pair, to 1000 for a royal flush. When the cards run out, scores are totted up and the player with the highest value in chips is declared the winner.