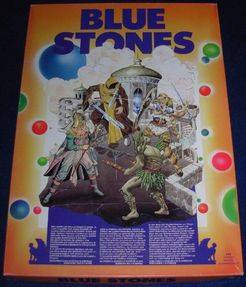 Wargame set in the world of Zargo (see "Zargo's Lords" and "Zargos"). The Wizard-Monks defend the magical Blue Stones against three other races. A classic wargame, albeit with a more tactical scale than Zargo's Lords. As usual with International Team, no date to be found anywhere. My guess would have been 1970s; listed as 1987 by a German Nuernberg game fair review. Rules in French, Italian and German only! Funagain claims to have an English translation. I suspect the author is Marco Donadoni, who also created Zargo's Lords.