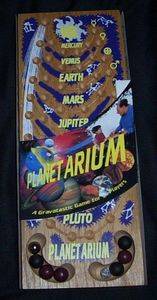 A wooden board represents the solar system; a series of shallow indentations is used to indicate the path of each planet. Some of these spaces are also used for the path of a dangerous comet. Each player is dealt three cards, each listing a different planet. This determines which pieces that player is allowed to move. On each turn, the current player moves one planet (represented by a magnetic marble) one space, then rolls an eight-sided die and moves the comet (represented by a ball bearing) that number of spaces. If magnetism causes two planets to collide, both are destroyed; if the comet hits a planet, the planet is destroyed but the comet remains. When a planet completes its orbit unscathed, its controller gets to draw a new card. At the end of the game, when all planets are orbited or destroyed, the player who successfully completed the most orbits wins.