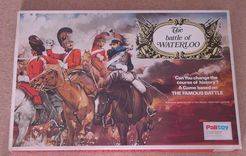 The Battle of Waterloo is a simple wargame made by Palitoy. The board is a stylised schematic representation of the battle field which has a 'Snakes and Ladders' feel to it. The units move by die roll along a number of tracks which represent historical key points/targets in the battle. Along each track there are 'quasi historical' events which can either aid or impede the advance of your forces. Some advance you nearer your goal others either send you back or eliminate the unit. The object of the game is to have the most points remaining upon the board at game end which can be triggered in a number of ways. Different types of units are valued accordingly so artillery are worth 6 points, cavalry 4 points and infantry 1 point. The units are plastic figures representing the forces present at Waterloo; a small head and upper torso represents the infantry, a horse head represents the cavlary and artillery are represented by small cannons. The game consists of the board, a rules pamphlet which includes historical detail and illustrations about the battle, a die and the following pieces; 2 red Allied cannon 6 red Allied cavalry 10 red Allied infantry 3 blue French cannon 7 blue French cavalry 8 blue French infantry A sister game in the series was also produced on The Battle of Balaclava also designed by Malcolm Greensmith.