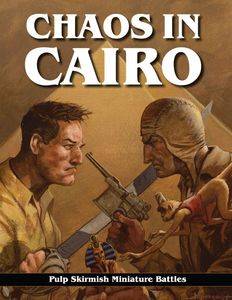 Chaos In Cairo (CIC) is a fast-paced, skirmish-level miniatures battle game designed to simulate clashes in the Pulp-era of fiction. CIC tells the tale of warbands of rival antiquarians and their associates battling for items of occult power amidst the dusty streets of 1920’s Cairo, Egypt. CIC is a Goal-System Game, based off of the same mechanics that power the SuperSystem: Superhero Miniature Battles game (specially tailored to fit the Pulp genre). CIC focuses on a clash between two unique bands of rival antiquarians, and complete game stats for these models are included. Additionally, an appendix is included featuring rules for character and henchmen creation, allowing players to bring in appropriate models from any range.