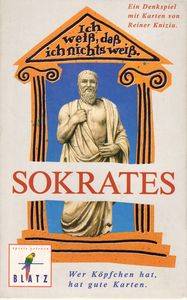 He who believes he knows something still does not know enough. But he who has a little luck, weighs his chances, and joyfully takes risks can win the most cards. But the risk does not always pay off. As Sokrates said: "I know that I do not know anything!" Sokrates is a light card game where players attempt to collect sets of numbers or colors. The deck consists of 54 cards: three each of values 2 to 5 in red, yellow, green, and blue, as well as 6 wild Sokrates cards. Each player tries to collect as many cards as possible. Whoever has the most cards at the end wins.