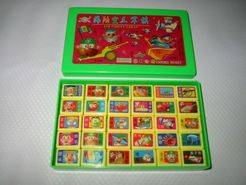 The literal translation of the title is Sea-Land-Air Fighting Chess. This is an expanded version of Lu Zhan Jun Qi (Army Chess). Besides the soldiers featured in Lu Zhan Jun Qi, this game also features ships, planes and land features like tanks. The board also features a sea to accommodate the naval pieces. Like Army Chess, it is a game for two players but requires a third person to act as umpire in resolving battle. The objective is to capture the opposing force's flag.