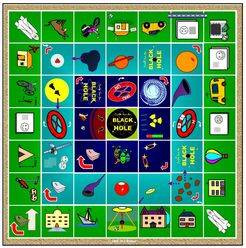 A negotiating game that is very simple and intuitive to play, with a novel negotiation mechanism that benefits players that are kind and friendly rather than selfish and self-centred. It reflects the interdependent world we live in, where unrestrained selfishness can bring the world crashing down around us. Children love the simplicity of the game and adults love its openendedness. The game is also ideal for practising foreign languages at all levels. Plus five more games that are played on the same board. The six games included in the pack are: Rescue: a negotiating game, for ages 9 and up Walk like a Zombie: a crazy chasing game, for ages 5 to 10 Easy Money: an easy game with lots of money, for ages 6 and up Half your Money: for those who like the Rescue game, but don't feel like negotiating, for ages 7 and up Zombie from the Hole: all the adventure of the Rescue game plus a zombie! for ages 10 and up Party Game: a cool party game for teenagers, for ages 15 and up.