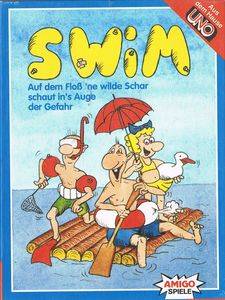 This is an abstract game with a watery theme. Players try to stay in the game by collecting valuable card sets; in each round, the player(s) with the lowest score loses a wooden log and may have to "swim". The last person still in the game is the winner. To prepare for the game, three cards are placed face-up on the table. Each player receives three cards and a "raft" of three logs. On their turns, players then swap either one or all three of their cards for the cards in the middle, trying to achieve a valuable set of cards, pass, or declare "SOS" if they thinks they have a valuable enough set. A round finishes if one player has three cards with value 11 (a total of 33 points), in which case all other players lose a log, or if a player declares "SOS", in which case all other players have one more turn before the round finishes. Players now compare the values of their card sets. A set of three equal numbers (other than 11s, which is worth 33 points) is worth 30.5 points. If a player does not have three equal numbers, s/he adds up his/her card values in one colour. The player(s) with the lowest score lose(s) a log. When a player loses all his/her logs, the player swims. If that player needs to lose another log, s/he is eliminated from the game. The last person still in the game wins.