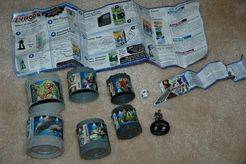 A new collectable miniatures game geared towards younger players (ages 8 and up). Each player has an avatar figure which is hidden inside one of several "zypods": nesting-doll like containers which have a top and bottom half that represent different fighting creatures. When the creature is defeated, the zypod is "cracked" so that the pod nested inside comes into play. The game ends when one player finds the other's avatar and defeats it in combat. The initial set will have 90 different creatures to collect, creating thousands of possible top/bottom combinations.