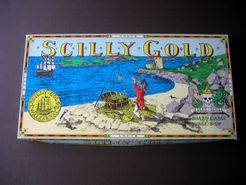 The object is to be the first player to land on the space where the infamous Jim Bones has hidden the gold that was removed from the 18th Century wreck in the Scilly Isles (off the tip of Cornwall, England). Normal and compass dice direct the movement. Collect three Jim Bones cards giving the distance, direction and place. Land on the spaces to pick up a clue. When you have three clues you claim the Golden X card. Opponents can then attack you to claim the clue cards also. The reach to claim the gold is then on.