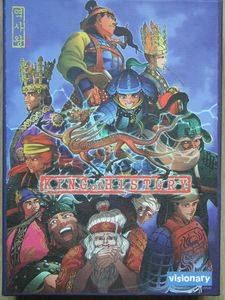 From the official English translation of the game manual: "The game is based on the history of Goguryeo, Baekje, Silla and Balhae, the four ancient nations in Korean peninsula and Manchuria. This is the time when Korea began to shape its unique cultural traditions, through competition and collaboration with China and Japan. Each player will select a region and expand the territory to build a nation. The game features many famous historical figures, war heroes, scholars, and great kings. Players will be able to learn Korean history and geography while enjoying the game. The goal of the game is to expand the territory to build a nations. Player who first earns the winning points wins the game. Points are calculated by adding territory points from the card game and points obtained from the event cards." The King of History is a combination of a cardgame and a boardgame.