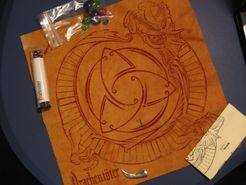 This is the first game of Gameheads, a game company founded by a gameshop owner from Berlin. This is a very simple game for 3 persons (can be played by 2, but isn´t good this way). The board is a Dragon that shows the places were the players must move his figures. There are 6 dice, each with different number of faces, and each player can use each dice only one time in a single game. The single game works with rounds and the goal is to roll the dices with a result always bigger than the player just before. The point is that you can use the dice only one time in each single game, what means, if you use the D12, for exemple, right at the begin and don´t have a good result, you cannot use this D12 again later to have better chances to beat a high result. The winner is the player who has the better results. But there is another trick thing: in each single game, one of the players is the Dragon. If he wins, then the Dragon wins, and the dragon receive a "victory point". The complete game is made with 3 single games, what means that every player will be the Dragon one time. The game can be played with many more than 3 persons. To do so, one new player will join the table in each new single game, to substitute the loser of this single play.