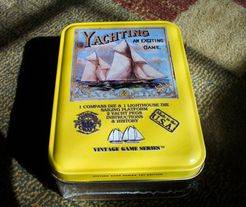 Be the first to travel around Long Island in a yachting race. An eight-sided compass die determines the direction of travel while a six-sided die determines how many spaces one can go in that direction. If a player cannot move in the direction rolled, the ship is not moved for that turn. A player may also refuse to move when it wouldn't be to their advantage, or move a smaller distance when there aren't enough spaces available. The six-sided die is numbered 2 through 5, and has a lighthouse where the "1" would go. When the lighthouse is rolled, the direction die is ignored, and the six-sided die is rolled again. This player may move the number of spaces rolled in any direction, and may change direction as often as they please. If the lighthouse is rerolled, it is counted as a 1. This game, along with others in Channel Craft's Vintage Game Series, comes in a small tin. Movement is made with pegs, which rest in a hole after each move, making it a suitable choice for travel.