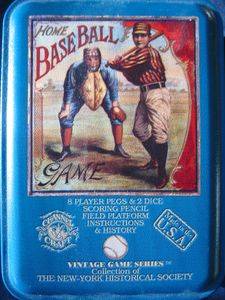 Get a higher score than your opponent in nine innings. Two dice are rolled and added together, and the result is referenced on a chart. Possible results are hits (singles, doubles, triples and home runs), outs (including a double play), foul balls, and even wild pitches. Since individual strikes and balls are not included on the result chart, the game plays a bit faster. The game includes 4 pegs for each player, two standard dice, and a pencil to keep score. This game, along with others is from Channel Craft's Vintage Game Series, and is part of the Collection of THE NEW YORK HISTORICAL SOCIETY. It is a replication of the McLoughlin Brothers game of the same name originally produced in 1901. It comes in a small tin. Progress is marked with pegs, which rest in holes after each play, making it a very portable game.