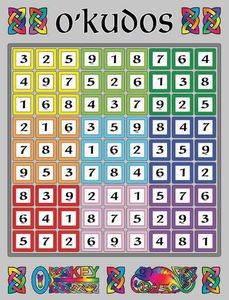 O'Kudos is a small promotional game that was available from the designer at Essen 2005 and as a Christmas card. The O’Kudos board is a completed Sudoku puzzle. Each of the nine areas is represented by nine small numbered squares of a unique colour. Depending on the number of players, each player is secretly assigned either two or three of these coloured areas. By placing counters on the board, each player attempts to cover up as many of their opponents’ numbered squares as possible. At the end of the game players score the value of the numbers in their own coloured areas that have not been covered up. The player (or the ‘game’ if it has also been assigned colours) with the highest score is the winner.