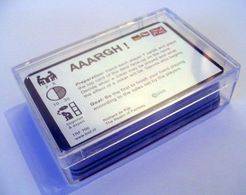 | The Realm of Fantasy

Each player gets 7 cards. The first who finishes his hand wins the game. But: there aren't any rules yet which tell you which card can be played onto which other card. When it's a players turn, he plays a card, or draws a card and makes a new rule before he plays one card. So you have to remember the rules set by the players to finish your hand and win the game. It's not as easy as it sounds, why do you think it's called AAARGH !? Rules are printed in English, German and Dutch. The box contains 50 playing cards.