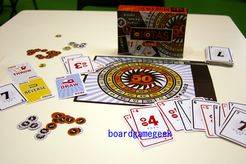 Hictas is a card game with the aim of moving the marker on the board to the 50 goal zone. The 46 numbered cards are numbered 1-10, and there are two each of the Special cards, Skip, Reverse, Draw and Throw (Uno-like actions, with the Throw card forcing the next player to discard a card instead of having a turn). The cards 1 to 5 give the player the option to move the counter forward or backwards; the cards 6 to 10 are advance cards only. There are three rounds. The winner of each round is the player who reaches the goal by using his last card to move the marker into the goal zone. The losing players pay the winner in chips the value of their remaining cards. The winner is obviously the player who has most chips at the end of three rounds. The two sides of the board have the Standard and the Risky Wheel game. The Standard game’s goal zone is 50 to 61. The Risky Wheel game offers less leeway as the goal is exactly 50. The name Hictas comes from the Japanese verbs to subtract and to add.