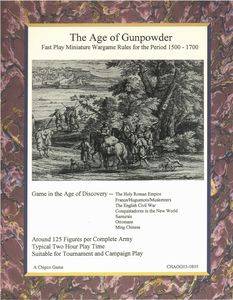 Game in the age of discovery and the three musketeers! Span the world from China, Korea, and Japan to the Holy Roman Empire and the new world. The Age of Gunpowder is a fun, fast play rules set that takes about two hours to play and allows the historical gamer to fight battles in every corner of the globe. Complete army lists are included that cover all major and many minor combatants in this fascinating period. Be Cortes, Charles V, Cromwell, Moctezuma, Hideyoshi, Suleiman, or Gustavus Adolphus and stake your claim to the world! The Age of Gunpowder offers the player of historical wargames the following: Fun, fast play rules for gaming in the age of discovery, 1500 - 1700AD Army lists for French, Holy Roman Empire, Polish, Turkish, Samurai, Ming Chinese, Aztec, Swedish, Royalist, Parliamentarian, and Conquistador armies. The rules allowing for playing: - The English Civil War - The Thirty Years War - The religious wars in France and Northern Europe - The Japanese wars of unification - The Japanese invasion of Korea - The Ottoman invasion of Europe - The European conquest of the New World The rules are divided in 50 year rule segments that comprehend the changing roles of pike and musket infantry, and the combat system portrays the interaction of pike and musket during the period.