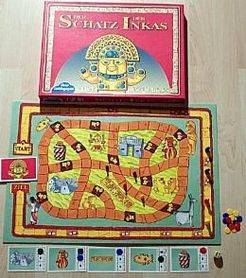 This is a game about collecting treasures of the Incas. The center of the board shows a number of different treasures, connected by paths. Five cards are drawn, each showing one of these treasures. Players roll a die to move their pawn, and when they reach a treasure that is on one of the cards, they place a chip in their color on that card. Each card can be visited three times; the first player to find a treasure gets the most points. The score is kept on a track around the board. Several spaces on this track have a symbol; if a player lands on such a space, they may discard one of the treasure cards. The winner is the player that is the first to reach the end of the score track. Not to be confused with the Ravenburger game of the same name.