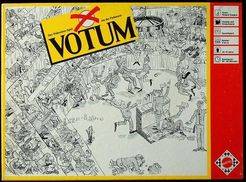 from the game rules translation A true-to-life game about election victories and majorities for 4 to 6 players. The unique game VOTUM allows you to play the exciting role of a party leader, who might belong to the generation of the grandsons of the present-day greats. Votum is a fast and talkative, sometimes loud and often clever game: it requires decisive bargaining, a little luck, and, above all, else the gift of negotiation. Each player is responsible as the trustworthy chairman of a political party, whom he leads through three legislative sessions, that is, game rounds. During each session, five elections take place followed by the formation of the government. The goal is to advance as far as possible in the parliament. Advancement comes, on the one hand, through luck (namely, your cards) and the way you use it, that is, playing the right cards at the right time, and, on the other hand, through skillful negotiation with your fellow players about posts and their related points. Success is measured in points. Each player has a sixth of the game field (the plenary hall) in front of him, his points are marked in the track of his color. After 15 elections, the strongest party-chairman wins; that is, the one with the most points.