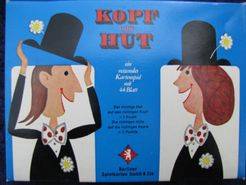 The game consists of 44 cards, 22 showing a head and 22 a hat belonging to the head. The 22 pairs can form 11 couples, as there are a man and his wife (or a woman and her husband, if you like...)depicted on the cards (racing drivers, soldiers, cowboys, chinese, sailors etc.). Every player gets a certain number of cards and tries to melt head and hat, and, if he's lucky enough, to melt the couple too. This is done by picking up a card and discard. You can do that from the open discard pile or from the concealed reserve pile. When the piles have been used up, you have to pass a card from your hand to your neíghbour. If he can form a pair, he is suspended from passing a card, next player in line has to proceed. Game ends when all the pairs have been formed, every pair counting 1 point, every couple 5 points. A light little family card game. The original Rudi Hoffmann graphics drawn by the maestro himself add to the atmosphere of the game.