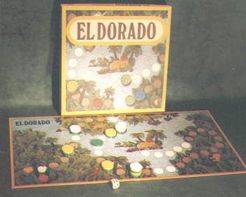 A very rare Rudi Hoffmann game. The aim of the game is to reach the Isle of Dreams ELDORADO. Each player receives four markers, which are one color (red, yellow, blue or white) on top. All markers are green on the bottom. Players roll a single D6 and move any one of their markers the total count on their turn. Markers can land on top of one another, and, in so doing, trap opponents' markers, or their own until the top one is voluntarily moved off the stack. If a player's marker lands on the white spaces (in the water), that marker is turned into an island (green side up) and is stuck there, able to be used as a stepping stone for other players, for the duration of the game. The marker(s) that reach ELDORADO are stacked in the order that they reach there. Final score is highest for the top marker (last to arrive) and decreases for those lower in the stack. The winner is decided by the player whose marker(s) score the highest total points in the final stack.