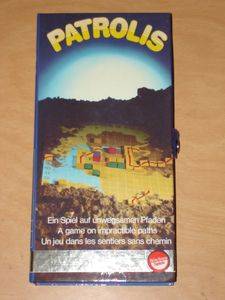 This is a game from the Bütehorn small box series, described by the publisher as "an exciting mental game for 2-6 persons". It is basically a route-planning connections game, in which players take turns laying tiles depicting roadways in such a way as to be first to reach a number of goal markers of varying values. The player whose accumulated goal markers score the most total points at the end of the game is the winner. The original version from Ludate has a 17x17 board. The later version from Bütehorn has a 16x16 board.