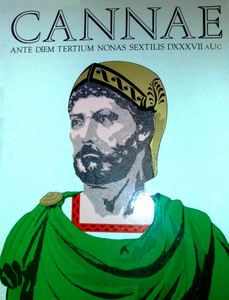 Massive simulation of the battle of Cannae (216 BC) between Romans and Carthaginians. It has three maps and 1200 counters, of which approximately 800 are combat units. Roman legions are represented in some detail; each legion and wing contains 40 counters - 10 each of triarii, princeps, hastati, and velites. The sequence of play is fairly traditional. There are 32 turns, each representing 15 minutes. Because of the short turn length units generally take losses in 25% increments. There are superior and subordinate leaders. Subordinates must be within the command range of a superior to function. Leaders give combat bonuses and also improve the morale checks of units in their command ranges.